In this case study, Pizza Hut combined geo-fencing and SMS text marketing over a 15 month period. During this time, they set up geo-fence locations within a half-mile radius of each location. When customers who had signed up for SMS messaging were within a half-mile of a Pizza Hut location, they received an SMS promotion on their phone. Pizza Hut experienced 142% more efficiency in increasing incremental sales than other channels. Plus, their campaign was 4.4 times more effective than TV ads and 2.6 times more effective than online ads. Sure, they may be a larger company than your own (they were marketing to 340 locations), but the same principles apply to companies that only have a few locations. Fun fact: UK Pizza Huts sell different foods than their American counterpart. You can enjoy onion rings, chicken bites, popcorn shrimp and lasagna alongside your pizza!

Key takeaway: Incorporate geo-fencing in your campaign and watch your conversions skyrocket. With Geo-fencing, you can track a customer’s location using GPS, Bluetooth, or beacons. It is a highly-effective marketing tactic that targets the 30% of the international population that uses location-based services. 92% of U.S. smartphones are able to respond to geo-fencing, making it one of the most accessible forms of marketing.

One of the most important parts of getting people to sign up for your SMS text marketing campaign is advertising that it’s a service you offer. National Wholesale Liquidators got the word  about their mobile marketing campaign inside their storefronts, online and via print advertising. They’re a medium-sized retailer with 12 locations, but they were able to build up a subscriber database of 50,000 customers in just the first month. These numbers climbed so high because they offered an incentive: $5 off any purchase over $25 when customers joined. Plus, customers with the promotion spent 80% more on average than those that didn’t receive the promotion ($45 vs. $25).

Key takeaway: Offer an incentive that involves buying a certain amount of your products/services to ensure customers aren’t just using you for a freebie.

In 2011, Ford launched an SMS text marketing campaign that resulted in a 15.4% conversion rate. In their call-to-action, they prompted newspaper readers to text FORD to 63611 for more information about purchasing new vehicles. Upon texting their interest, readers were asked to respond with the car they were most interested in, their zip code, and a full name to be contacted by a local dealer. If you stopped after giving your zip code and didn’t proceed with your name, the system texted you three different times over the next month to finish the sequence. That’s right—remarketing over text. You have to be careful with this tactic though. If you text users too frequently, they’re more likely to unsubscribe than buy from you. This campaign was so successful because it made it easy for interested readers to get instant information from the convenience of their phone.

Key takeaway: Blend the old with the new. Ford took a more traditional form of advertising (print ad in a newspaper) to promote their new mobile marketing campaign. 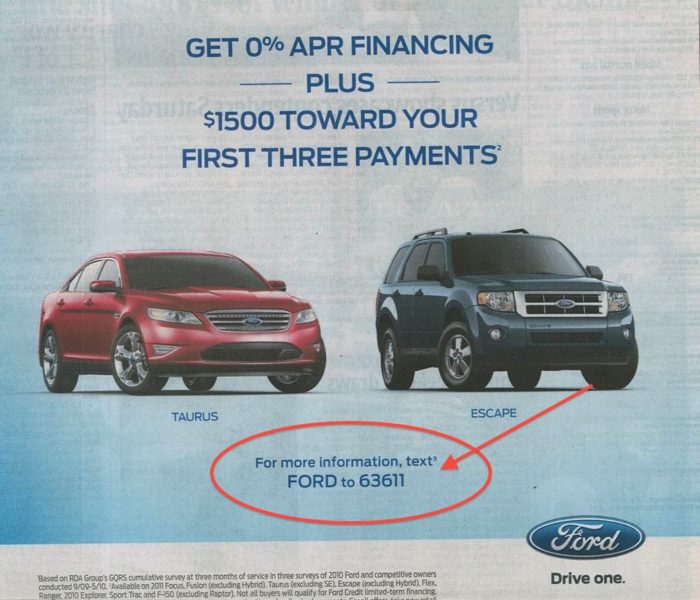 Tide’s SMS text marketing campaign promoted a new high efficient laundry detergent. They attracted subscribers by offering up the chance to win a year of free Tide HE detergent. Initial signups for the campaign were done on Tide’s website. For users to enter the contest, they were prompted to select the type of washing machine they own and submit their mobile number and carrier. Those who signed up for their campaign were privy to special offers, stain solutions and laundry tips—all sent directly to their phone. This unique form of content marketing ensures a higher interaction rate than shared social media posts, because those who subscribed are already interested in what you have to say. Sharing on social media doesn’t always guarantee that your posts are seen by all your followers, but almost everyone looks at their text messages. So far, the campaign has brought in 48,000 subscribers.

Key takeaway: Get creative with what you share over text. Incorporate content marketing to increase readership and establish yourself as an influencer in your market. After Hurricane Sandy, the Red Cross came up with an ingenious way to raise money for those affected by the largest Atlantic Hurricane on record—utilize text message marketing. Twenty percent of relief funds were raised via text message donations. This form of giving has gained popularity due to its convenience, and some churches have even adopted a ‘text to tithe’ option into their service. Instead of having to give out your credit card information, the donation is added to your mobile phone bill. Though this may not be marketing a product, it does show how people are more willing to spend money if they can see that the charity/business is putting in the effort to create convenience.

Key takeaway: If you’re a charity or church, ‘text to give’ may be a great tactic for you. The film October Baby sought to attract viewers by launching an SMS text marketing campaign. In advance of the film’s release, fans could text “OCTOBER” to an SMS short code for movie updates and free passes. The opt-in test message contained a short hyperlink to a sneak peek of the trailer, further incentivizing fans with exclusive content. They got the word out about their campaign via their pre-existing email database, channel partners and social media accounts. With their mobile database of 50,000 fans, they were able to boost attendance for the film. They reached the number eight spot at the box office opening weekend, and film became the number one limited-release of all time. Their campaign garnered an 11% click-through rate to watch the exclusive trailer, proving that people are attracted to content that isn’t released to everyone.

Key takeaway: exclusive content can be just as valuable as coupons, and they cost you a lot less. As a provider of yearbooks, caps, gowns, announcements and class rings for high schoolers, Jostens knew that the cell phone would be their best platform to reach the young people they were targeting. Jostens had previously been using direct mail and home phone calls to remind students about upcoming appointments and deadlines for payments, costing them hundreds in postage and time. Plus, it was hard for Jostens to keep track of students’ addresses and phone numbers. Beginning in 2008, the company chose to go with text message updates. This promotion would be advertised on the diploma cards that are handed out to students. They incentivized students by telling them that by singing up, they would be automatically entered to win a free class ring.

Jostens utilized their database of numbers to send reminder messages the night before they show up to schools and alerting students when forms needed to be handed in and payments submitted. They encouraged students to spread the word about this new system by forwarding the message along. Their switch to SMS text messaging resulted in a higher student turnout for deadlines. It also allowed students to call a number for any questions they might have. Jostens was able to save over $1000 in postage alone, proving that SMS text marketing is the best way to target high schoolers.

Key takeaway: Know your audience. Text marketing works if you have a younger target audience, but older customers may not utilize their phones for texting.

Jamba Juice Bakersfield, which operates out of four locations in central California, had a tough challenge ahead of them: create a marketing campaign on a lean budget and with no experienced marketing employees. They wanted to entice local residents to enter their storefronts, and found that mobile marketing was their best option. Their first step in the process involved creating the mobile keyword ‘Jamba’ which customers could then text to 99000 to sign up for the marketing program. To encourage signups, they waved a carrot: a free 16oz smoothie coupon which would be sent to the subscriber as soon as they entered the keyword. What made this carrot so delicious was that customers could use the coupon on their purchase immediately. They also sent out weekly or bi-weekly promotions for ‘BOGO free’ and ‘20% off’. They were able to grow their database by over 1,000 contacts in just two months, thanks in part to large signs promoting their text marketing campaign. These signs were located at the point-of-purchase, encouraging many to sign up quickly so they could get their item for free. Social media played a role as well, specifically their Facebook Fan Page and Twitter account. Overall, they saw a 10% increase in in-store traffic across all four stores. SMS text marketing is one of the most effective and budget-friendly tactics available. Read our ultimate text marketing guide for a breakdown of the process and rules you’ll need to follow with your text marketing campaign, or check out the details of our SMS text messaging service. Feel free to contact us if you’d like any more information on how this process works.