The Evolution of Mobile Marketing

From Cave Phone to Today…

Think about how much time you spend on your phone. In fact, think about how many times you’ve dropped your phone on your face while laying down in bed. Is there an awkward moment while you’re hanging out with your friends? Bring out the cell phone. Have a question that’s not worth looking up in a Thesaurus? Whip out Siri. It’s become second nature for us to go for our cell phone when we’re bored, so it only makes sense that advertisers would turn to mobile marketing to get the attention of potential customers. If you’ve ever wondered about the evolution of mobile marketing (as any nerd would), we’ve provided a breakdown of how mobile marketing has changed with the introduction of smarter phones, enhanced geo-fencing features, and the growth of marketing opportunities through the Google Search Engine.

Before we get into the different stages of mobile marketing (and types of ads), let’s take a look at how phones themselves have evolved. Your grandma’s flip phone might make you laugh now, but those guys used to be the norm! The first-generation Carphone that weighed about 3.5kg due to its enormous battery pack. Remember the antennas? This model’s plastic antenna SERVED NO ACTUAL FUNCTION. It was literally all for show…since I guess some people actually thought the antenna was cool. Can we start #bringbackantennas2017? This was the first digital mobile phone that could be held comfortably in one hand. 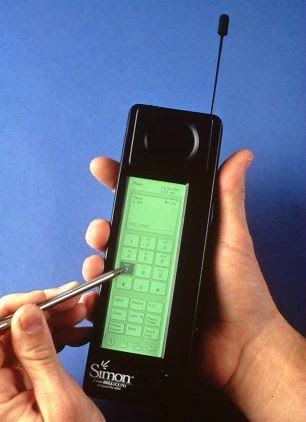 At $899 and operations only within 15 US states, this model might seem a little overpriced—for good reason though! This was the first mobile phone to feature software applications (apps) using a stylus and touch screen. Its list of abilities included faxing, emails and cellular pages. Plus, you could access an address book, calendar, appointment scheduler, calculator, work time clock, electronic note pad, and handwritten annotations. We’ve now reached the original flip phone model! It sold more than 60 million units and was listed as #6 in The Top 50 Greatest Gadgets of the Past 50 Years by PC World. The turn of the century brought the first device marketed as a ‘smartphone’. It had the sleek design of a normal phone and the capabilities of the Symbian OS. This was the biggest-selling mobile phone of all time, due in large part to its affordability. It brought widespread communication to developing countries. With the iPhone, smartphones became mainstream. An attractive design and intuitive user interface boosted the popularity, and the use of finger input as opposed to a stylus, keyboard, or keypad was a huge hit. This Android smartphone was the first major competitor to the Apple iPhone. Bundled applications included the Layer Reality Browser, GPS directions, and an ebook reader. These 23 phones to look out for in 2017 should give you a hint of what we can expect from future models. Here’s a teaser: better cameras and larger screens! 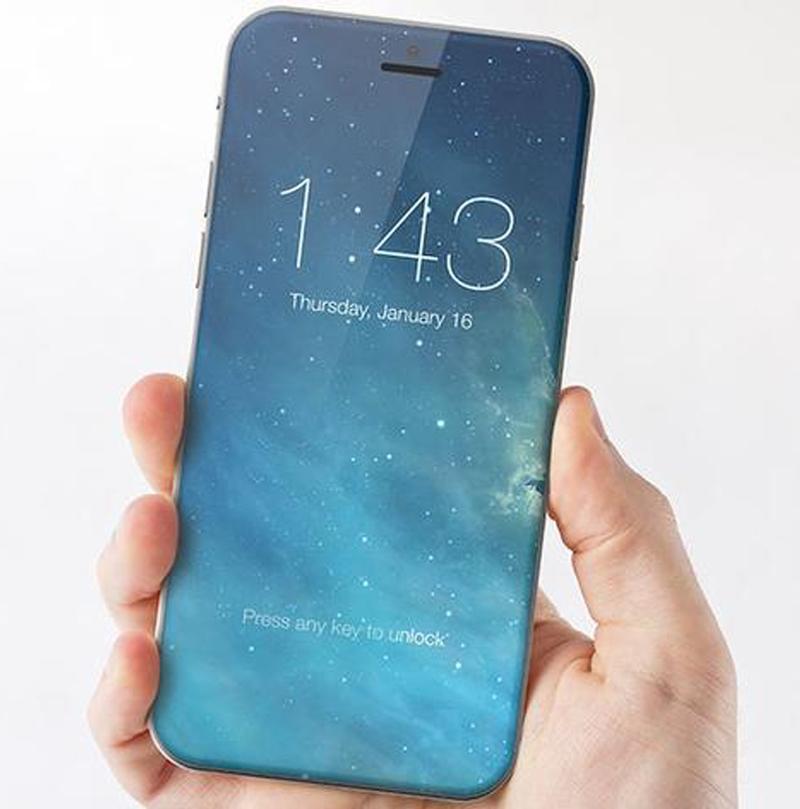 The first mobile advertising conference took place in 2000 and was sponsored by the Wireless Marketing Association. In 2002, marketers were starting to pick up on how phones could be used for time-sensitive and location-based advertising. This is now more commonly referred to as geo-fencing or geo-targeting.  Even event venues were getting in on the action, sending out concert announcements when users were within a certain range. Alerts sent out by media outlets were supported by ads as well. Unlike an email which has to be opened, SMS messaging is read immediately when it pops up on a user’s screen, much like push notifications.

2007 brought with it the iPhone which, though certainly not the first smart phone, was the most user-friendly at the time. It revolutionized the way phones were used, since it acted as both a business tool and entertainment source. It’s popularity naturally drew eager mobile advertisers. However, the advertisements were not on the same design level as the device itself. Advertisers were using the desktop browser ads and reformatting them for mobile web browsers rather than making mobile-specific ads from the get-go. The responsiveness of these ads was abysmal, forcing advertising technologies to adapt to mobile screens.

Once marketing gurus heard that they could monopolize on mobile apps, they were all over it. Since the first mobile apps were free to users, they needed support from mobile advertising. Once 2014 hit, everyone was using mobile advertising within apps, since people were spending more time on social media apps and games than in their browser. By 2015, 88% of online mobile use was in-app, leading to innovations in friendly user experience tactics. These included interstitial ads, overlay ads, native ads, and video ads. 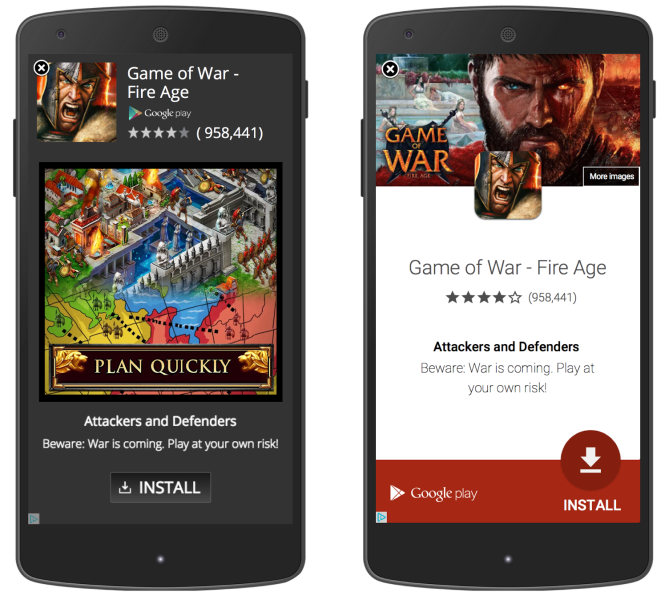 Interstitial ads are the ads you see in between levels of your game. They’re full-screen ads that display at a natural transition point in the app (ie: while the game is paused). They’re what makes that app download free—you’ve got to suffer through a few ads if you don’t want to shell out the money for a paid application. An overlay ad occurs on the screen while you’re using an app, similar to those banners at the bottom of the screen when you’re watching some TV shows—that free advertising spot for the network. It typically shows in the bottom third of the video display and displays as a .JPG, .PNG, .GIF, etc. Native ads are the most user-friendly, because they’re relevant to whatever content you’re accessing. Say you’re using an app that gives you stats on football games. A native ad for this platform might be a pop-up advertising a blog that performs a similar, informative function. Video ads are pretty self-explanatory. You’ve probably seen them played before a video on YouTube before. They’re definitely the most pleasing type of ad, since they require minimal effort on the part of the user. These ad types can be combined in your mobile marketing campaign to create a strategy that will grow your mobile presence.

QR Codes were extremely popular for a while, and even resulted in some amazing campaigns. They hit the scene in 2011, appearing first on business cards, billboards, and storefront displays. A QR code is a 2-D barcode that a smart phone’s camera scans and interprets. Your phone might either direct to a website, make a phone call, or take you to a product page. Push notifications hit the scene around the same time as QR codes, and performed a similar function to marketing emails. They utilize built-in smartphone features to drive user engagement. They send reminders, give rewards for accomplishments, and advertise special offers. They go hand-in-hand with location-based services (GPS systems improve ad placement), and can be turned off or on in your phone’s settings.

We could go into a whole new blog post about how ASO (app store optimization)  is used in mobile marketing, but the gist of it is that you can optimize your app to make it show up higher in an app store’s search results. If your app ranks higher, it’s assumed that you’ll draw in more app downloads. Since the app store is built separately from traditional online search engines, app developers are charged with including certain specifications (ie: keywords)  to ensure the app’s ranking is high. Other factors that can affect ASO is the total number of downloads and the ratings of your product. The term gained popularity in 2012. Besides SMS messaging, MMS campaigns (multi-media messaging services) picked up in 2015. These campaign can go beyond text, incorporating personalized vide messages to lure in customers. Mobile marketing goes hand-in-hand with mobile search advertising, calculating the number of clicks your ad gets when certain keywords are searched on a mobile device through Google. It’s imperative to create a landing page that will lead to conversions, since you’re paying for every click on your ad. Since most users research a product or place before making the drive/purchase, a carefully placed ad can be the perfect foot in the door. According to article on mobile search advertising trends, “mobile devices now account for 53% of paid-search clicks and…88% of clicks on mobile search ads are incremental to organic clicks”. The #1 search engine driving US paid search ad clicks on mobile is Google (95%), so Google Adwords is the way to go if you want to see big results. Though it’s hard to pinpoint the exact year that mobile search advertising became a thing, Google AdWords started off in 2000. In May 2016, Google announced that it would be reformatting ads to better accommodate a mobile-first world.

If you’re interested in learning more about our mobile marketing services or want to get started on your campaign, contact us!